The Russian meatball soup recipe Frikadelki is a staple of the … American cuisine. I am in America and it’s a staple of my cuisine.

I wonder if anyone questioned the “American Cuisine” concept. What IS that, American Cuisine? Burgers and fries? Probably not; if we look at the full name (“hamburgers” and “french fries”) it is clear that the origin of the item is not North America; they were adopted and brought to the rank of “Kings” under “Golden Arches” of course, and then reexported all over.

In fact, with the exception of “poutine”, which itself is not very old (60 years of age or thereabout), I don’t really know of any “real” North American dish (and even the well-known poutine is challenged by the New Jersey “disco fries”).

Please don’t throw stones – I do not claim I know all that is to know! I am sure there will be disagreements with this. Please leave a comment with your observations and proposals, if you do have a real American dish in mind!

But does it matter? North America has the best of not both worlds, but all worlds. Just look in any phone book (well, look on the net now) in any large city and you will see a plethora of Chinese, Thai, Italian, French, Greek, Middle Eastern, Brazilian, Indian, Cuban, Argentinian, Japanese (I have to breathe) restaurants. Even British Tea Rooms, in Naples where I live there are two of them, not that the British kitchen was ever famous. Below is the one we like the best for atmosphere:

Of course most of these are in fact some kind of fusion restaurants, American tastes are not the same as they are in the places where the cuisine originates. So you end up with American-Chinese, American-Italian (pizza anyone?), etc. Did you ever see “Sushi – Thai” in Japan? Of course not; only in America! And here I come with some Russian additions, American-style!

But are they indeed Russian? My own family (husband) disagrees, and tells me the dishes I wrote about until now ( Russian Beet Salad,  Russian meat patties kotleti, Russian Potato Salad Olivier) are well known in Romania too. As is the one I am going to present today: Russian meatball soup, Суп с фрикадельками (sup s frikadel’kami).

All subscribers to my newsletter can download for free the recipe (a .pdf printable version of this article) plus all other recipes too from my “Resource Library” page. So why not subscribe? You will find there also patterns and other very useful printable items.

I have heard the frikadelki soup named “frikadeller” sometimes; well, that is a Danish word for “meatballs” which shows us that indeed the soup is well known elsewhere.

Is it important if it is Russian, Romanian, American, Chinese, Japanese or German? In my mind, not at all. Is it good? Mmmmmmmmmmmmmmm!

This is the full list of ingredients for this frikadelki Russian style soup:

The quantities here will give about 5.5 quarts of soup (5 liters), perhaps a little more. For a family of 4 this is enough for two meals for the whole family.

Meat preparation for the frikadelki soup is identical with what we have seen from the fried meatballs (kotleti), so I will simply copy it from there. In fact, when I prepared the meat for the “kotleti”, I set aside ⅓ of the composition to use later. But here it is again for reference:

Mix everything except the salt in one bowl; the bowl needs to be large enough to take all ingredients. I usually use a pot for this.

You do not have to use all the liquid from the beginning, you can add three quarters for example and see how easy it is to mix. If the mix is not mixing easily, add all the liquid. But be careful here, the resulting mixture must not leak any liquid or “flow”; it has to be solid. When you shape a ball from it and leave the ball on the counter, the ball will maintain its shape.

I usually mix everything by hand; a habit I guess. There is nothing that says you can not use a mixer like the one here (the kind that is used to mix dough, not an egg beater), if that is what you prefer.

We will later make small balls out of this composition, as small as you like. Personally I make them about 1” (3cm) in diameter, unless I am in a hurry then I make them larger. Probably. I never really measured! But the smaller, the better, and the faster they will boil.

Cut the cabbage julienne, the smaller the better. As you will see in the images, I am not very good at this step!

Add the water, cut cabbage and the whole onion to the pot ( I use a 6 liters, 6.5qt pot) and let it boil. The cabbage is not easy to boil, the other vegetables will boil much faster, so start with the cabbage in the pot. Set the stove to high heat until it starts to boil, then adjust to medium (medium – low) such that the pot still boils slowly while uncovered. Mark this moment, from this time on your soup will be ready in about 90 minutes.

Cube the carrot, parsnip, celery and add to the pot; at this point the cabbage is probably already boiling. The cubes do not need to be very very small, there is in fact no rule and there is no difference in taste or preparation time if you cut the cubes ¼” (6mm) or ½” (12mm) in size. I aim somewhere in between but again, as with the cabbage, my aim is not very good!

Hint: sometimes, if I am in a hurry, I actually grate the carrots, celery and parsnip on the grater using the largest size available. It is faster, the taste is the same, and you do not have to boil the vegetables too long after. But this is a lazy seamstress hint, any good cook will tell you the grated vegetables will become mush if boiled. Did I say I am not a cook?

After you put everything in the pot, the stove is still on medium/low, cover the pot and let it boil for about 30 minutes from the moment when it starts to boil (told you to mark the time!).

At this point the pot is about half empty and the boiling under cover will not be furious on low/medium heat. If it boils too hard, turn the heat lower until it boils quietly.

While the pot boils I make the meatballs (small) and set aside; they will not be there for long, no need to refrigerate them. These are the Russian frikadelki for our soup.

I then skin and cut the potatoes in large chunks – I am not sure but I think it’s called into fries in English.  Again, no exact rule here, but the potato pieces will need to be bigger than the other vegetables, or else they will disintegrate in the soup.

I then add the potatoes to the soup (be careful not to be burned by drops from the boiling liquid) and wait until they start to boil. In the meantime I add Vegeta Natur (or whatever other dried vegetable seasoning you use) and salt. Add salt to taste, also in moderation. Salt can be added later, but can not be taken out. I added just under two teaspoons of salt.

Together with the potatoes I will add the sauerkraut (or pickle) juice; do not add all at once, add a little, allow it to boil, then taste, then add a little more until the taste is “just right”. Nobody can say exactly what ”just right” means, it depends on the exact ingredient used (some are more sauer) and of course it depends on your taste.

When it starts to boil again, I add the tomato paste. I used the whole can (6oz, 170g), you may want to use less if you don’t really like sour soup. Tomato paste will make the soup a little sour. Mix it well and allow to boil.

Hint: when you taste the soup, take a little liquid out in a large spoon and put it in a plate, allow it to cool down. Hot liquids mask their actual taste. This is of course true for any soup, not only the Russian style frikadelki.

Now I will take the onion out of the soup; this is a personal preference, I do not like the taste of boiled onion. If you do, then you might as well cut the onion in small cubes at the beginning and leave it in.

When the soon-to-be frikadelki soup starts to boil again, add the meatballs. I add them one by one to make sure they are not coming apart in the hot liquid. Again, make sure you don’t get burned by drops of hot liquid. The meatballs will need to boil about 40 minutes if they are about 3cm (a little over 1”) in size.

Now we can indeed call it “frikadelki soup”!

At this point my pot is full, it has a little over 5 liters (5.5qt) of liquid. It is still boiling softly.

I will now cut the pepper in small cubes and add to the boiling liquid. Allow it to boil until ready.

Allow it to cool down, and enjoy! I sometimes eat it with sour cream, about one spoonful of sour cream for a full plate of soup. Again, personal preference. My husband eats it with a crust of fresh baguette, if available, and a little grated fresh horseradish, or perhaps a small hot pepper, jalapeno or regular red. Again, personal taste!

The recipe has a lot of vegetables (more like a stew, really) and not a lot of meat, only about one pound (1/2kg). With soups, the bigger the quantity you prepare, the better tasting the soup; that is why I made a large pot, even if we are not always that many to eat it fast.

After the soup cools down, probably overnight, it must be refrigerated. If you do not plan to eat it in one or two days, and you probably will not, if it is a large quantity, you can freeze individual portions in coveted Corning containers (not plastic!) and the soup is going to last for weeks very well. However the potatoes and carrots in the soup do not react well to freezing, so if you do plan to freeze it, I suggest adding less potatoes and carrots and more cabbage.

Sorry, I have to finish now. All this talk about food made me hungry!

Want to improve your sewing skills?

Get my detailed guide on SEWING MACHINE TENSION ADJUSTMENTS free!

Subscribe to my weekly newsletter with sewing tips and tutorials, free sewing patterns, printable PDFs, and other useful content and you’ll find the eBook in your inbox.

Did you find this tutorial helpful? If so, save this pin (see below) on your board so you can come to this tutorial later when you are ready to try preparation, and follow me on Pinterest for more tips, tutorials, and inspiration!

Do you want to see more recipes I inherited from my mother and grandmother? Check out the ones below and don’t forget to share! 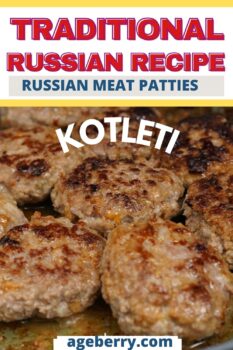 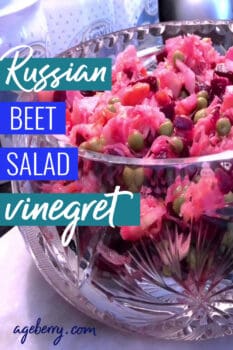 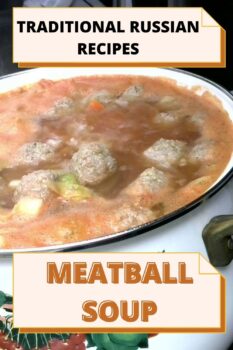