A couple of days ago I was surfing the Internet without many purposes, waiting for my tea to cool a little. I stumbled upon a story that moved me and I want to share it with you here. It is a story of progress, but it is a story of continuity also. Some have said it is a sad story; I do not think so. In my opinion, this is our human nature and our destiny, as civilized beings: look forward, to new and better things, but cherish the past which made us what we are.

It was a pure chance for me to read this story, logically speaking I should have never found it in the 5 minutes I allowed myself to surf the net. I am not in Leeds, not in the UK even and at that time I was searching – I think – for an embroidery machine specifications. Nevertheless, I did find it – and it made such a big impression on me that I wanted to share it with you.

I do not have an explanation for why this story has touched me; it just did. There is nothing extraordinary here, after all, right? But somehow this made me think of the past, of the future, and what we are.

I also read some comments from the original article, and I was surprised to find someone from British Columbia, Canada has also found the article! So I am not the only weird one.

The article and the image attached appeared originally here: The story of a family and a Singer Sewing Machine (Number: 2261060 490260) and is reproduced here with permission from Mr. Jeremy Morton, Editor, South Leeds Life. All copyrights are retained by the original owners. The original post was written by Mr. Ken Burton.

The article contains of course British spelling, I would say they are correct!

A Beeston lady told this story …

The year is 1886, in a small town called Wolverton near Northampton lived a thirteen year old girl, Miss Edith Rock, and Edith had just completed her limited education.

However, she had shown an interest in all manner of needlework, and was very adept at all she attempted. to encourage their daughter’s independence, her parents bought her a ‘Singer Sewing Machine’. The model was known as a ‘Table Top’, it was dual-working, the operator could work by hand or have it hands free and work by a treadle from underneath.

During the late 1880s and early 1890s the machine was in constant use, consequently with progress, Edith rented two small rooms, the front room as a Haberdashers (Drapers Shop) and the rear room where the machine was installed for her work.

In 1897, Edith now aged twenty-four had met and was marrying a certain Edwin Mackerness (Ted). He helped Edith acquire much larger premises, now owned not rented, in Church Street, Wolverton. Another ‘Singer’ was purchased, and a young lady was employed to help with the sewing and serve in the shop, though only Edith herself would use the ‘Table Top’. The machine always in use, the dressmaking progressed, and the Drapery Shop continued to flourish, a printed card for this business still survives with the machine.

In June 1901 and Edith had a baby boy, the clothes for him being turned out by the machine. Six weeks later her mother-in-law produced a baby girl. Bearing the same surname, and being christened ‘Edith’ there were now two ‘Edith Mackerness’ to feature in the life of the machine.

As the years passed the second Edith was taught to use the machine, the only person allowed, apart from the first Edith.
Through the First World War our machine is churning out military undergarments. On into the Roaring 20s and the machine, now back to producing lightweight civilian clothing, mostly it was undergarments, with the occasional ‘Made-to-Order’ dress for ‘Better Off’ customers.

By 1938 the first Edith Mackerness had reached her mid-sixties and with failing eyesight and arthritic hands decided to retire. The machine was passed on to the second Edith, now Edith Rollings, married with a daughter born in 1933, and living close to Wolverton at Stony Stratford.

So the machine now has a change of venue, change of ownership, and less work, it being mainly for domestic use only for family and friends. Fabric was hard to get hold of during the Second World War, but Edith managed to find some ‘Parachute Silk’. She used some it to make a dress for her seven year old daughter. The white fabric was brightened up with coloured binding at the neck and sleeves, with a matching coloured sash; this I remember well for I am that seven year old daughter, now aged eighty-six.

I moved to Leeds (Beeston) in 1980 and in 1983 the ‘Singer’ came north after my mother, the second Edith, passed away aged eighty-two.

Following in family footsteps I had been taught to use the machine in my teenage years, it had been many years since I had seen it let alone use it, and the first thing to gen-up on was how to thread it. Leeds being a city with connections to the clothing trade most of my friends had a sewing machine, but more recent models, with a bobbin, mine had a shuttle and there lie the difference. The shuttle was about 1¼ inch in length, pointed at one end, looking just like a toy open rowing boat. To accompany the shuttle there are several small spindles about an inch long, any one of which could be clipped into the shuttle.

The shuttle had a row of holes on one side with a bar below them, and when threading, the thread needed to go back and forth from hole to hole, and then under the bar, there was a set sequence through the holes and if you got it wrong nothing worked. Fortunately, the second Edith had written out instructions on a sheet of paper (now brown with age) and once these were adhered to the ‘Singer’ was back in action; not making garments any more but altering and shortening, skirts, trousers, etc. and on one occasion making curtains and sewing on ‘Rufflette Tape’.

All went well until the late 1980s, when I went to purchase more needles, only to be told they were shortly becoming obsolete. The salesman had just seven left in stock, so I took all seven (of which there are still six left). Then in the early 1990s it was realised that the machine, though sewing was not locking and a pull on the thread meant that all that had just been stitched immediately came undone.

A resident in Beeston, qualified and renowned for sewing machine repairs was called in. He could find nothing wrong with the mechanism, when he noticed I had threaded the machine with a fine ‘polyester thread’! Apparently it was all that I had been able to purchase, but the ‘Singer’ had been designed to work only with Sylko Grade 40 and the new polyester threads were much too fine. Unfortunately, Sylko was no longer in production, the Company having gone out of existence.

So at last, after 100 years and probably a lot more, the machine has gone into retirement, not dead, as its still workable, with the right equipment, but forced into sleeping.

Do you remember Carol’s previous post “Is Learning To Sew Hard?” Seems us, sewing enthusiasts, are a sentimental bunch, and also seem family is important to us!

For those of you who, like me, have never seen a sewing machine with a shuttle, that is another way to move the lower thread. The shuttle looks like in the image here but for the life of me, I could not explain in words how the mechanism works, having never seen it in real life.

This Singer is not a singular one, many machines made in that era that were stored properly and maintained are still working. I have myself a machine that was produced sometimes in the 1950s (yes, also in the UK)

If the number mentioned in the article (2261060) is the serial number of the machine, which seems likely, the International Sewing Machine Collectors Society website says it was built actually in 1877, 9 years before the story begins, so today (2020) the machine is a venerable 143 years old.

And perhaps more importantly: will we retain the family connection 150 years from now? In the era of disposable things, worldwide travel, and constant human movement, will we retain the human connection through generations? I already have few, if any, things passed to me from my grandmother, and with the advent of digital photos, even photographs will be just a virtual impression somewhere on a memory card.

If you want to remember this article save this pin on your SEWING board, and follow me on Pinterest for more tips, tutorials, and inspiration!

I hope you liked the article as much as I did, and I hope you will enjoy other articles on this site! Check them out: 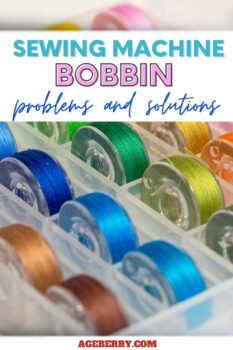 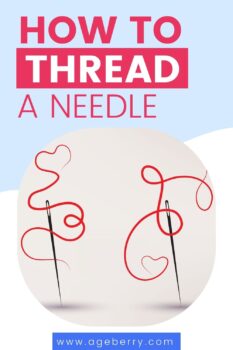 Sewing machine tension guide: everything you need to know about the bobbin tension